With UpNano’s cutting-edge technology it is possible to print objects with sizes ranging from the sub-micrometer to the centimeter range and up to 40 mm in height – within times never achieved before.

With UpNano’s cutting-edge technology it is possible to print objects with sizes ranging from the sub-micrometer to the centimeter range and up to 42 mm in height – within times never achieved before. 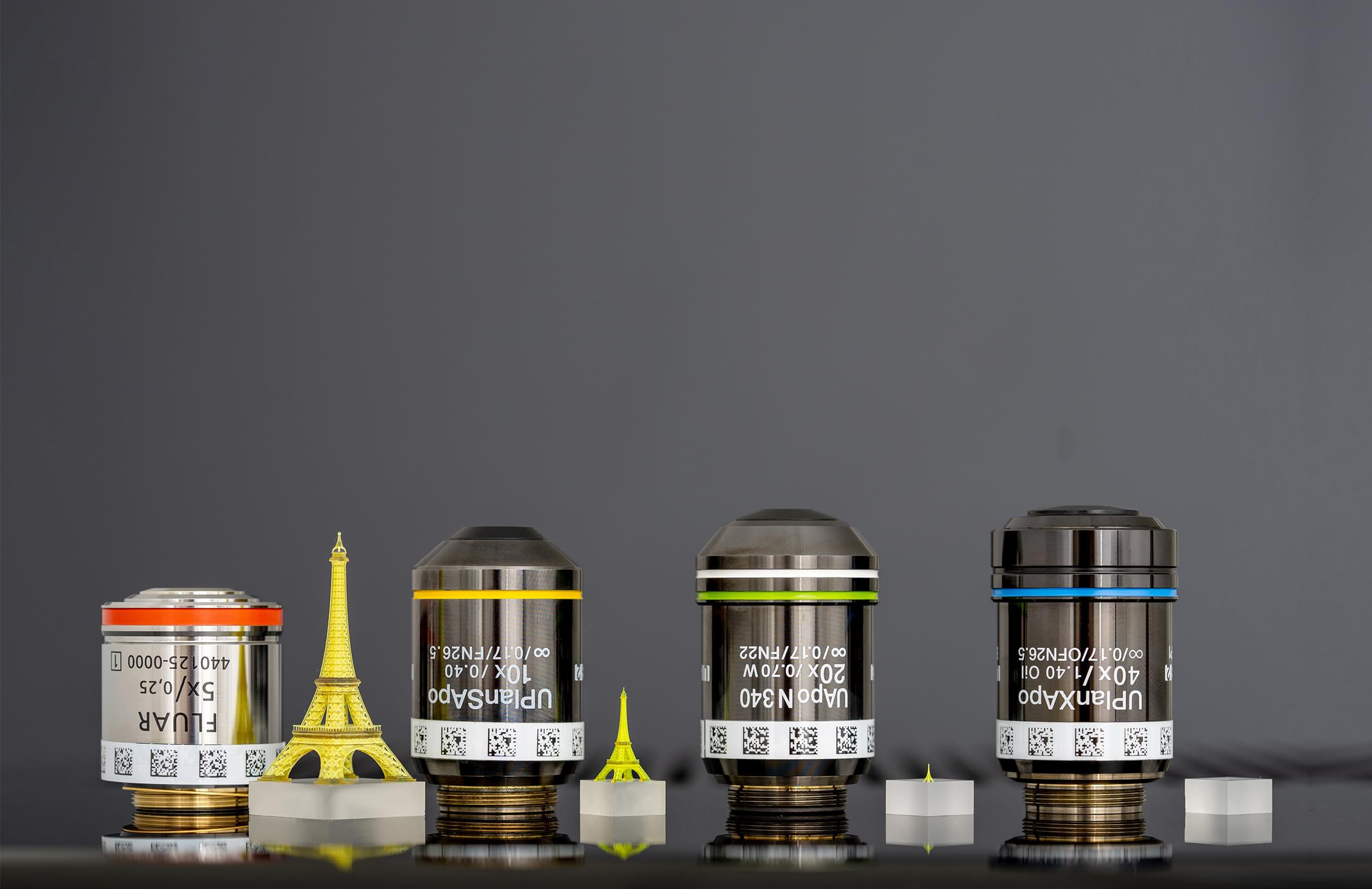 Production of polymeric micro parts across 12 orders of magnitude

A high-power laser and an optimized optical set-up enables a highly precise and fast fabrication in the nano, micro, meso and macro range.

A new era in 3D printing

The continuing trend towards miniaturization demands evermore compact and powerful products with decreasing development cycles. The requirements for microparts in the production sector as well as in academic and industrial research are constantly becoming more challenging. To keep up with these developments the industry strives to constantly search for novel, more precise, efficient and profitable production methods.

Established 3D printing technologies such as (micro)stereolithography fail to produce such highly resolved microparts, since the minimal resolution of such systems is in the range of 20 µm. The NanoOne 3D printing system developed by UpNano enables users from different sectors to fabricate high-resolution microstructured parts for their specific applications in a cost-efficient manner, beginning already with the very first batch produced. This system can be used in various fields ranging from electronics to microoptics and biocompatible applications in cell and medical research.

Taking the lead in microfabrication

With NanoOne, production times and therefore unit costs for microparts can be significantly reduced, without sacrificing resolution and tolerances. The versatile technology based on multiphoton lithography can be used to manufacture both ultrafine components with structural details in the range of 170 nm and macroscopic microparts in the centimeter range. With a writing speed of up to 1,000 mm/s and a throughput of up to >450 mm³/h, NanoOne combines high performance with a user-friendly fast process.

The laser focal point is enlarged for bulk segments or precisely focused for the outer shell and fine details. Therefore, throughput can be significantly increased, with internal areas being printed faster.

The laser focal point is enlarged in order to increase throughput, while maintaining the mechanical properties of the printed component.

High-resolution segments
The laser is tightly focused to achieve the highest possible resolution.

UpNano’s proprietary outline mode enables high resolution and low surface roughness. The contours of solid printed components are written with the highest possible resolution to exploit the full potential of the respective objective.

Among other things, suitable for the production of lenses with a surface roughness down to <10 nm. With this mode even larger lenses can be produced in an economical time and with exceptional surface properties.

With few simple steps to the final product

The user is supported from the first steps of preprocessing to postprocessing by the well thought-out hardware and software solutions as well as functional accessories.

The resolution requirements as well as the overall size of the object are decisive for the choice of the objective. It is important to find the right balance between the smallest details and the total volume of the component to obtain a satisfying printing time.

NanoOne features a unique vat mode which allows the fabrication of large objects with a height of up to 40 mm. During printing, a vat with a precision glass window is placed above the objective, thus preventing contact of the resin with the objective and preserving the focusing power of the objectives. During printing, the object is drawn up out of the material vat. The distance between the current print layer and the objective thus remains constant.

With the bottom-up mode it is possible to produce high-resolution structures directly within a substrate. The laser beam is focused through the high-precision glass bottom of the substrate and the structure is built from bottom to top. Possible substrates include well plates, Petri dishes and microfluidic chips. 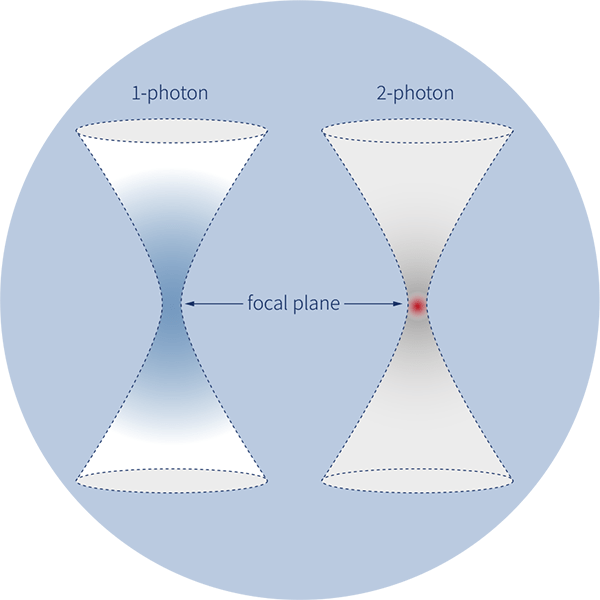 UpNano’s high-resolution 3D printing system is based on 2-photon polymerization (2PP), which allows highest resolution in the sub-micrometer range. The 2PP technology takes advantage of the spatial selectivity of 2-photon absorption (2PA). The 2PA probability significantly reduces beyond the focus point, thus also the fluorescent volume is lowered, resulting in higher spatial resolution.

Direct comparison of the single and multi-photon beam path in fluorescence microscopy shows that 2PA only occurs in the focal point of the beam. Therefore, monomer crosslinking is induced only at the focal plane, as polymerization is dependent on this non-linear absorption – whereas the emitted light is absorbed along the whole beam in the case of 1-photon absorption.

This explains why parts produced with 1-photon based processes, such as stereolithography, are produced layer by layer, while 2PP parts can be produced in a pre-defined volume with a resolution of less than 1 µm.